Nathan, now 21, was born in Salt Lake City – the home of the 2002 Winter Olympics. He started skating because of the Olympic movement in his hometown, and he quickly became a multiple winner in the novice and junior ranks. At the 2017 U.S. Championships in Kansas City, Nathan ignited the crowd with a record five quadruple jumps in the free skate. His record-breaking score allowed him to become the youngest U.S. men’s champion in more than five decades.

At the 2018 U.S. Championships, Nathan followed up with another U.S. title, and earned a spot on the 2018 Olympic team. He was honored to be named to the team. Nathan was able to earn an Olympic Bronze medal in the team event. In the individual event, he started off the competition by faltering in the short program, placing 17th. However, Nathan did not give up. In the free skate, Nathan made Olympic history by becoming

the first man to attempt six quads and land five cleanly. He placed first in the free skate with a score of 215.08, the highest in Olympic history, finishing 5th place overall. More importantly, Nathan learned valuable lessons from his first Olympic experience that he will remember throughout his competitive career. Three weeks later, Nathan competed at the 2018 World Championships in Milan. He placed first in both the short and free programs. He landed six quads in the free program, winning the 2018 world champion title.

At the 2019 World Figure Skating Championships in Saitama, Japan, Nathan broke ISU world records in both the free skate (216.02) and total points (323.42), beating out two-time Olympic champion Yuzuru Hanyu of Japan.  At the 2019 Grand Prix Finals, Nathan defeated Yuzuru Hanyu once again, setting up one of the biggest rivalries in skating. 2020 began with his fourth consecutive U.S. title, the first since Brian Boitano in 1988.

Nathan is most at home in an ice rink, and it makes sense given his family’s passion for anything on ice. Not only has he become a talented figure skater but he also loved playing hockey with his brothers. Nathan, the youngest of five children, started skating at the age of three. Nathan trained in ballet at renowned Ballet West Academy. Ultimately, he decided to focus on figure skating, and he relocated to Southern California to train with Rafael Arutunian.

Off the ice, Nathan enjoys playing guitar, biking and long boarding along the California beaches. Nathan is currently a sophomore at Yale University. And typical of Nathan to challenge himself, he is taking a full course load while competing and training as he is aiming to return to the 2022 Olympics in Beijing. 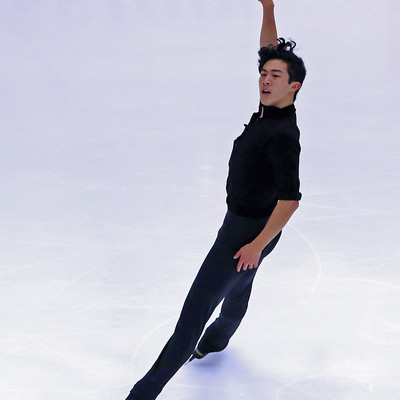