Elvis has been involved in a number of shows and tours. Since 1994, Elvis was a leading skating star for the Tom Collins Tour of World Figure Skating Champions, touring over 50 U.S. cities each year. From 1994 to 1998 and 2002, Elvis starred in his own tour across Canada - The Elvis Tour of Champions.

Despite a busy training schedule, skating performances, charity events and product endorsements, Elvis finds time for other interests. He loves riding dirt bikes (he received his first motocross bike for his seventh birthday). He has a black belt in karate which he earned at the age of 16. He then moved on to Chinese Kung Fu in 1989 and studied under Sifu Glen Doyle, for which he attributes much of his success in skating.

In the summer of 1994, Elvis was chosen the first "Kids Ambassador" for Ronald McDonald's Children's Charities. In addition, Elvis has helped a number of other charities, including Parkinsons, The United Way, Variety Village and Sick Children's Hospital. He is a supporter of the Special Olympics and frequently has been a spokesperson for other charities, as well as finding time to coach many of our young figure skaters.

The Governor General of Canada, in January of 1996, presented Elvis with one of the highest awards in this country, the Meritorious Service Decoration, which is awarded in recognition of a deed or activity performed in a highly professional manner or of a very high standard that brings benefit or honour to Canada.

Elvis has appeared in a number of professional television skating shows, including a Disney special, Brian Orser's Blame It On The Blues, the Anne Murray Classic Christmas special, and many other television productions. In 1994, Elvis performed in his own television special, Elvis Airbourne, aired by Baton Broadcasting Station, which won a Gemini for the Best Sports Series or Program for 1994, beating out such finalists as The Stanley Cup Playoffs and the Lillihammer Olympics. Another television production was Elvis Incognito, shown in 1997 for the Canadian Broadcasting Corporation, in which Elvis' performance was nominated as one of the five best performances in a Variety Special.

After winning the Silver Medal at the 1994 Olympic Winter Games in Lillehammer, Norway, Elvis won the gold medal at the 1994 World Championships in Japan. Elvis won gold medals in two further competitions, namely, Skate Canada and the Nations Cup in 1994. The year 1994 was culminated by Elvis' choice as Canadian Male Athlete of the Year.

In 1998, Elvis won the silver medal at the Nagano Olympics in Japan, notwithstanding a serious groin injury. He was recognized as a national hero by all Canadians as well as all skating fans around the world, for his courage and determination to compete notwithstanding his disability.

In August of 1998, Elvis’ Olympic performance was recognized by the Governor General of Canada in winning the Meritorious Service Cross. The Governor General announced that Elvis was named the sole recipient of the Governor General's Meritorious Service Cross for outstanding service to Canada. Later that year, he received the silver Greek cross in recognition of deed or activity performed in an outstanding professional manner or of an uncommonly high standard that brings considerable benefit or great honour to Canada. This award recognized the high level of professionalism at the 1998 Nagano Olympic Winter Games despite a painful groin injury. The citation states "his tremendous courage under such adversity won him a silver medal and demonstrated his indomitable spirit and dedication to the pursuit of excellence."

Also in 1998, Elvis was chosen as the winner of the Gillette World Championship for his on-the-field achievements and his off-the-field humanitarian contributions to the community and his charitable involvements.

On July 1, 1998, Elvis was asked by the CBC to co-host the Canada Day Celebrations in Ottawa. This was a one hour special on the lawn of the Parliament Buildings, and attended by over 100,000 patriotic Canadians. Elvis' performance received rave reviews and was the highest rated Canada Day special of all time.

In December, 1998, Elvis starred in Mannheim Steamroller’s Christmas Angel with Dorothy Hamill on NBC. Elvis also had a starring role with Michelle Kwan in a Disney skating special in February, 1999.

In 2002, Elvis won the gold medal at the 2002 Canadian Figure Skating Championships, making him a seven-time Canadian Champion. Elvis finished eighth at the Olympic Games and then announced his retirement from amateur figure skating.

Elvis was on The Simpsons in 2004 playing himself in the episode “Kill Gil” Volumes I & II during Season 18.

In 2004, Elvis embarked on a singing and acting career in which he had a leading role as DJ Vince Fontaine in the stage performance of Grease.

In 2005, Elvis became the Canadian Champion in the Kung Fu forms division of the WKA Federation and went on to win a silver medal at the World championships that same year.

In 2012, Elvis starting racing karts and in 2013 became the vice champion of Canada in the ASN Canadian Rotax Nationals in the DD2 Masters class. He continues to race on a national and international level aspiring towards racing cars in the near future.

In March 2014, Elvis took the stage on Broadway playing the iconic character Billy Flynn in Chicago. He performed eight shows in New York and eight shows in Toronto at the Princess of Wales Theatre garnering great reviews. He continues to take acting classes to pursue his career in acting for stage, TV and film.

Elvis works with his long-time friend and Kung Fu instructor Glen Doyle on different entertainment projects. Both Elvis and Gladys Orozco performed on stage in a roller blade show written by Glen and choreographed by his wife Roselle Doyle. The Land of The Eternals show was performed in the Burlington Theatre in the fall of 2012 and again to a sell-out crowd in Richmond Hill in 2013.

Elvis lived in Ajijic, Mexico for 12 years and met his wife, Gladys Orozco, in 2009. They were married on June 20, 2010 in Las Vegas, NV. In June 2014, Elvis and Gladys moved back to Canada to pursue their respective careers.

Elvis launched his own red wine on May 8, 2015 through Peter Jensen of Match Point Wines. A 2010 QUAD Reserve Meritage from the Niagara region was launched in cases of 12 and a limited 80 cases were produced. A percentage of sales benefitted Skate Canada to help in the development of skaters.

Elvis and his wife Gladys are animal lovers and have three rescue dogs; two Blue heelers and one Red heeler with collie mix named Sunna, Bestla and Isis.

Elvis was chosen to carry the Pan Am torch through his home town of Richmond Hill on June 24, 2015.

He is currently working with Skate Canada by assisting skaters on technique, mental training, and competition preparation. He is passing on his knowledge from what he has learned from his years of competition and his Kung Fu training.

He continues connecting with the community with motivational speaking in schools and businesses.

Elvis finished his kart season in 2015 with a third place at the Canadian Tire ASN Rotax Canadian Nationals in the DD2 Masters class.  He had a successful auto racing debut at the Trois Rivieres Race in August, 2015 in the Nissan Micra Cup Race finishing in the Top 10 out of 26 drivers.

For the 2016 season Elvis took a step back from kart and car racing and focused on his acting career.  Elvis played the role of Mercury in the TV movie Ice Girls, which began airing nationwide on the Family Channel Canada on March 11, 2016.  For the 2018 season, Elvis appeared on an episode of the Canadian crime drama Murdoch Mysteries. In the fall, 2019, Elvis enjoyed acting on the TV show Hudon and Rex. Other film projects which are non-skating related are in the works for Elvis as well.  He attends acting classes at Milne and LB acting studios in Toronto.  He is represented by Kate Kellner of The George Agency in Toronto.

Every December since 2015, including 2019, Elvis has played the lead on the skating stage show ‘Twas That Night in Busch Gardens in Williamsburg, Virginia.

In summary, Elvis is a three-time World Champion, two-time Olympic Silver Medallist and seven-time Canadian Champion in figure skating.  His love for speed and excitement is quenched through his off-road dirt biking while his creative side is expressed through his acting, singing and skating.  Elvis is still active in performing in many skating shows across Canada and the U.S. He combines athletic talent, character, intelligence and a deep commitment to his continued involvement in many charities and communities.  He is considered by most Canadians as a role model and a national hero for his courage and his integrity. 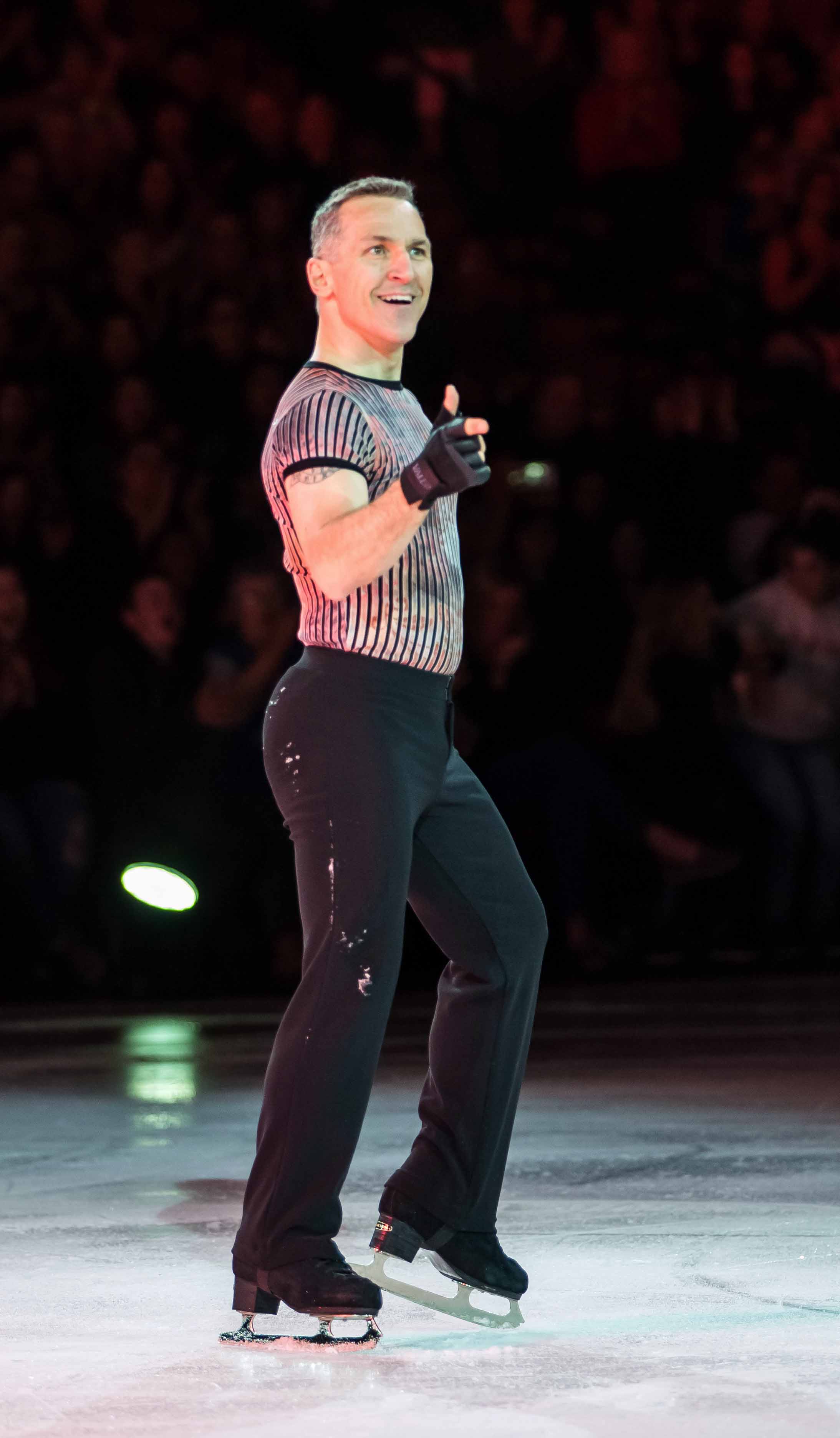