This is a new chapter in the lives of the elegant and emotive Canadian ice dancing duo of Kaitlyn Weaver and Andrew Poje. After 13 seasons, they have stepped away from competition to explore new aspects of their skating and their lives. As they focus on the art of skating - at least for now - they have left an indelible mark on the sport with their lyrical, stylish and moving programs.

Weaver and Poje’s “Je Suis Malade” is an iconic free dance that takes viewers on an emotional journey. After viewing it, Dancing with the Stars pro Anna Trebunskaya said, “They have all the right ingredients: charisma, chemistry and great dynamics in their own bodies.”

No ice dance team in the world brings more life experience to their performances than Weaver and Poje, which is evident in the sense of joy and nuance with which they skate. Throughout their partnership, they have persevered through setbacks to achieve stellar results and leave an indelible imprint on the sport.

Time and again, they have won praise from professional dancers for seamlessly translating dance to the ice. Internationally renowned ballroom/Latin dancer Julz Tocker described their Argentine tango free dance from 2013–14 as: “Both were very involved, emotionally connected and on the same page. It was very clear that they were in tune with each other.”

So You Think You Can Dance all-star Paul Karmiryan, described their 2014-15 free dance set to music from Four Seasons as: “I felt their timing was nearly flawless in their partner work. They did an amazing and beautiful performance.”

As competitors, before they went out to skate a program they embraced, which calmed them and let them know they were in it together. While they are still very much a team, in autumn 2019 they actually faced off in the Canadian TV series Battle of the Blades, which pairs figure skaters with hockey players. Weaver partnered former NHL player Sheldon Kennedy and Poje teamed with Canadian Olympian Natalie Spooner.

In a wonderful full circle scenario, Weaver and Poje served as models for the promotional poster the first season of Battle of the Blades 10 years prior. Their pairings dominated the competition and were the final two teams standing. Weaver and Kennedy emerged victorious, making her the first ice dancer to win the competition. Winners of the previous four seasons were pair skaters.

“Going in, I thought, ‘How am I going to be able to do this?,’” said Weaver. “As soon as I found out I was paired with Sheldon, I thought, “Okay, we’re going to be ice dancers and see how far this takes us.’… He’s a skating purist. I had such a ball helping to create these pieces where he was able to shine.”

Throughout the series, Weaver challenged Kennedy to incorporate ice dance moves - from sections of the Yankee Polka and Blues compulsories to hydroblading - into their programs. While she was impressed how Kennedy rose to each challenge, in the end she credits his heart and personality with carrying them to victory. All Battle of the Blades competitors earn money for Canadian charities. Weaver and Kennedy both chose Canadian Tire Jumpstart, an organization that is committed to ensuring kids have equal access to sports and physical activity. Together, they presented Jumpstart with a check for $100,000. Spooner and Poje split $35,000 for their respective charities, Fast and Female (hers) and Right to Play (his).

Poje and Spooner also shined throughout the series. Not only did they have great connection, they were daring in their moves, including when Spooner lifted Poje. The charity component was a huge motivator for Poje, and he was thrilled to bring exposure to Right to Play, with which he’s had a long affiliation.

“I didn’t know what to expect walking into it, but it was a fun project,” said Poje. “It was both exciting and scary at the same time because I never knew what to expect. Even though I was in my zone, it was completely foreign to my partner. We had such a short time to prepare and be out there and be vulnerable. I was fortunate to have that growth in a different way of performing.

“Even when Kaitlyn and I aren’t competing together, we’re still pushing each other to stay at the top,” he added. “That’s why we make a good partnership.”

The choreographer for Poje and Spooner was Michael Seibert and Paul Martini was a coach on pair moves. At the beginning of the rehearsal process, Spooner expressed three things she was intent on doing during the series - skate to the song “Juicy Wiggle,” lift Poje and show girls that they can follow their dreams.

“Those were her three goals and she achieved everything still playing hockey at the same time,” said Poje of Spooner, who continued to train and compete with the Canadian national team while Battle of the Blades was in progress. “Kaitlyn and I were blessed with two amazing partners that were fully committed to whatever we asked of them. Our forte is in the dancing, so we focused on trying to create those energetic moments, those stories—the things that make us love what skating gives us.”

When Weaver and Poje teamed up in 2006, a big goal was to become Olympians. They achieved it for the first time in 2014. Walking into Fisht Olympic Stadium in Sochi, Russia, Weaver and Poje were elated.

“Coming into the stadium, hearing the cheers and being surrounded by our Canadian teammates felt amazing,” said Poje. “At that moment we became true Olympians.”

“There was such incredible energy and excitement,” said Weaver. “I felt like electricity was running through my body.”

More experienced, but no less enthusiastic, Weaver and Poje returned to the Olympics in 2018, representing Canada in PyeongChang, South Korea.

Throughout their career, this dynamic duo have received input from some of the most innovative and inventive names in the sport. They trained with visionaries Shae-Lynn Bourne, Pasquale Camerlengo and Nikolai Morosov. Weaver and Poje also sought out instruction from people in the dance world. Morosov coached in both New Jersey and Moscow, and Weaver and Poje traveled with him. The time in Russia enabled them extensive exposure to the arts, dance and culture.

Following the 2019 World Figure Skating Championships, Weaver and Poje made the hard decision to step away from competition.

“We wanted to take this pause because we’ve been going for the past 13 seasons, pushing ourselves and not really ever taking a moment to breath,” said Poje. “We both needed to get perspective on life.”

“The decision didn’t come easily,” said Weaver. “I want to find things that bring me joy on the ice. I started saying yes to things.”

Weaver traveled to Detroit, where she and Poje trained for several years, and had the opportunity to shadow renowned coach Igor Shpilband. She also spent time in Toronto with choreographer Lori Nichol. She went back to Ice House in Hackensack, NJ, where she and Poje trained the last few years. Battle of the Blades gave her the opportunity to try out ideas, as choreographer Julie Marcotte gave her creative license in her work with Kennedy.

“Whatever my future is in skating, I want to learn first,” Weaver said. “I love working on the performance aspect. The next year is going to be full of travel and hopefully a lot of creative things. It’s an exciting time in my life. I get to write the next chapter.

“I found through Battle of the Blades that I really love creating and thinking of new ideas. One thing I want to consider is consulting in skating. I love to think of packaging, music choice, costuming and ways people can tell different stories.”

Poje is also saying yes to opportunities. He is interested in a consulting role, helping out with polishing performances and providing insight.

Competitive success brings opportunities. They have toured with Stars on Ice Canada several times. They enjoy sharing the experience with friends from the skating world and also thrive on the connection with the audience. The next few months are filled with shows, including the Scott Hamilton CARES Foundation gala in Nashville, the Golden Skate Awards in Milan, a memorial show for the late Denis Ten in Kazakhstan, a German holiday tour and then shows in Japan.

Away from the ice, Poje was tapped to do a photo shoot for Azzarenko, a men’s fashion and lifestyle magazine. The photos were shot at various locations around Detroit, including an incredible abandoned church. He wore several different styles of clothes—from casual pieces to an extravagant, modern tuxedo. He looks forward to doing more modeling going forward.

Since 2014, Weaver and Poje have been ambassadors for Right to Play, an international humanitarian organization that uses sport and play programs to improve health, develop life skills and foster peace for children and communities in some of the most disadvantaged areas of the world. They’ve made several appearances and are deeply moved by the organization’s mission.

“We speak about our experiences at the Olympics. That sets the stage to talk about how important sport is in our lives and how important it is in lives of children across the planet,” said Weaver. “That’s such a beautiful thing about Right to Play; they teach important life skills through sport and games.”

For the past two years, Weaver has served as an athlete ambassador for the relief, development and advocacy organization World Vision Canada during Stars on Ice. Last spring, she took a trip to Cambodia, spending four days in rural areas and three days in cities. Seeing how the other side of the world lives and hearing their stories solidified for her that giving back has to be a part of her life.

Mindful of a life to come after skating, both have been university students, taking part in distance learning education with the University of Waterloo. In March 2020, Weaver will begin a master’s program in intercultural communication at Royal Roads University in Victoria, British Columbia. It’s an on- and off-campus two-year program that requires her to be on campus two weeks each semester.

Poje has been studying biomedical science and is focused on finishing his undergraduate degree. Then he will assess whether he wants to pursue an advanced degree in business and finance. A dream job would be combining science and finance in dealing with wealth management and green and sustainable energies. He’s also been connecting some of the many people he’s met over the years and examining possibilities. He is determined to utilize his platform as an athlete to make a positive impact in the world.

The things Weaver and Poje have learned from skating have set them up to conquer whatever life sends their way.

“I’ll always treasure the human connection of this entire journey,” said Poje. “The memories I have of all the different countries, every inch of the world I’ve been able to see and experience is amazing and will fuel me.” 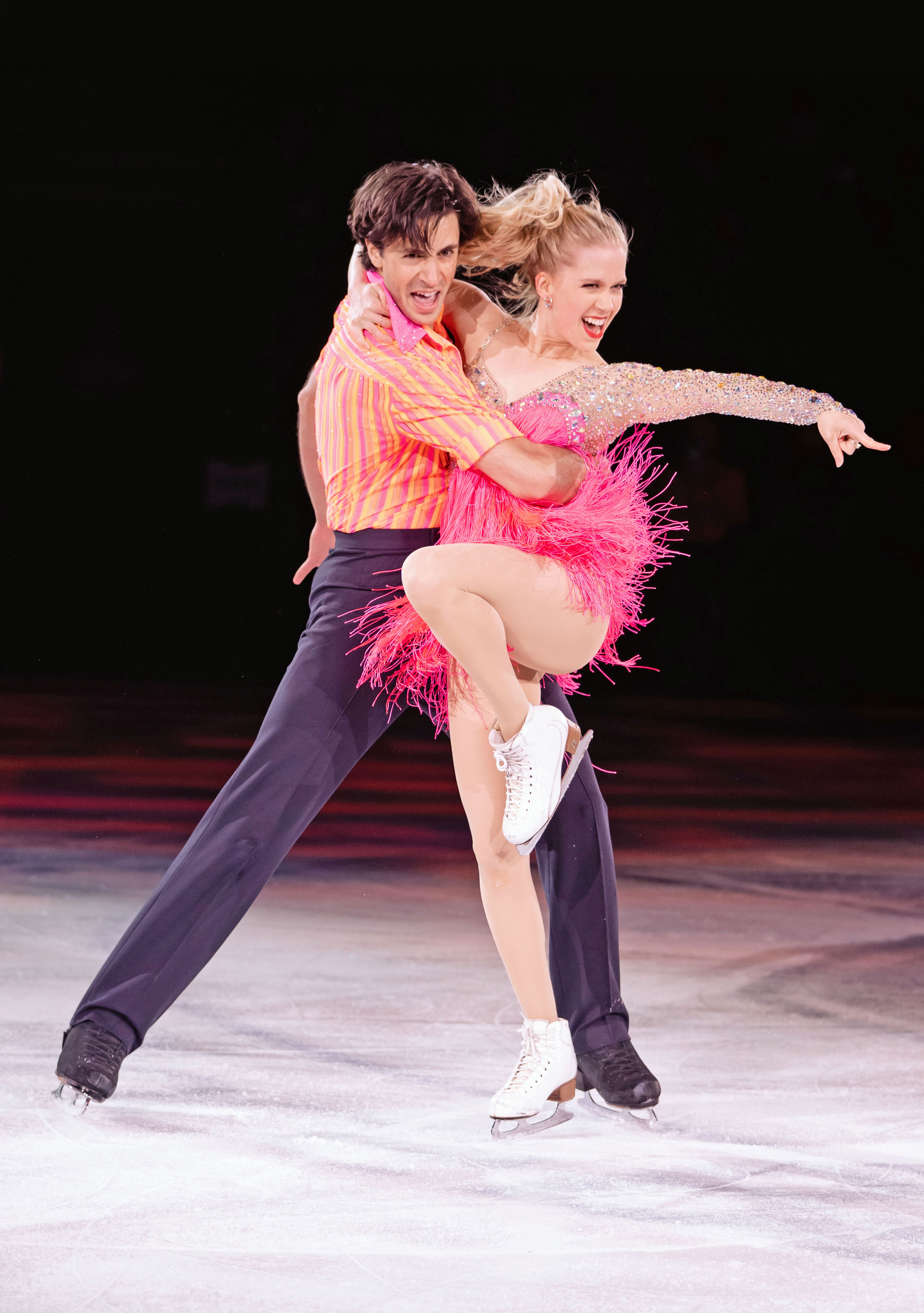