The time is now for Canadian Pairs Champions Kirsten Moore-Towers and Michael Marinaro. Following the retirements of longtime Canadian skating stalwarts, this pair team has stepped to the forefront as leaders. With podium placements at several international competitions and their appearance at the Grand Prix Final, Moore-Towers and Marinaro have positioned themselves as serious contenders for the World and Olympic podiums.

“We embrace taking on a leadership role,” said Moore-Towers. “We enjoy the responsibility that comes with being able to lead the charge and help the young skaters mold into good people and good, respectful competitors. Skating is a lovelier, more wonderful place when it’s filled with people like that.

“It does not mean we don’t want to win and we aren’t competitive, because we are extremely competitive people, but we strive to do it in a positive environment.”

When the pair teamed up in 2014, both were experienced competitors with considerable successes, but they believed the best was yet to come. They genuinely appreciate training and competing, and they relish seeing their skating evolve.

“The training is what I like the most,” said Moore-Towers. “I enjoy coming in and having goals each day. I like the people I train with. I love our team of coaches. When we have time off, I find myself missing coming into the rink and having that energy and sense of accomplishment.”

Marinaro feels it is important to take each day with a sense of purpose. “To cherish the experience and to be present along the path,” he said.

Their similar philosophies is what caused them to team up. Moore-Towers had already been to an Olympics—winning a silver medal in the team event in Sochi with Dylan Moscovitch—so she was searching for a partner she “could have a good journey with.” She felt this would be the last partner of her competitive career, and she wanted to enjoy skating to the fullest. Although it took patience and persistence, they and others saw their potential to exceed previous accomplishments.

“The ride has been really great,” said Moore-Towers. “We have a good time. We enjoy training. That is imperative in this difficult sport.”

“There’s no point in leaving any stone unturned when we’re so close to achieving our dreams,” said Marinaro.

They had their first Olympic experience together in 2018 and they take great pride in being Olympians and representing Canada.

“We cherish the ability to wear the Maple Leaf on the biggest stage for us,” Moore-Towers said. “It’s interesting to see how sport really does bring people together.”

“I had been dreaming about going to the Olympics since I was about 10 years old. When we qualified in 2018, it was one of the best moments of my life,” said Marinaro.

The goal for the 2022 Olympic Winter Games in Beijing is a spot on the podium. Pairs skating encompasses every aspect of skating—the jumps and spins of singles, the intricacy and connection of ice dance and the lifts and throws of pairs. Personality also plays a role and the ability to connect and sell a program. In addition to the elements, Moore-Towers and Marinaro are capable of bringing the audience along for the ride with their programs.

“We never run out of things we can make better,” said Moore-Towers. “We can even improve on little things that will make a program more effective.”

“Having an accomplishment as a team is twice as good as doing it by yourself,” said Marinaro.

After training in Montreal for several years, Moore-Towers and Marinaro are now closer to their families since following coach Bruno Marcotte to his new base in Oakville, Ontario. The move has enabled them to reunite with coach/choreographer Alison Purkiss, who has become an integral part of their team as she fine tunes details in their skating.

They currently partner with Pure Maple Water, an organic hydration option, as sponsored athletes and look forward to working with more companies in the future. 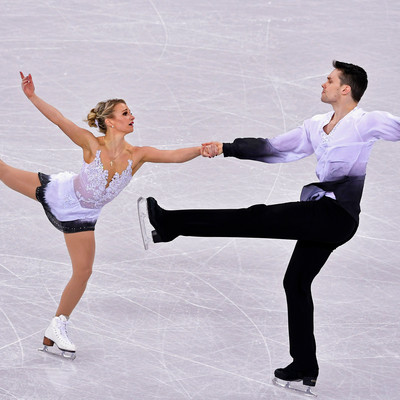 Great seats on sale October 7 at 12 noon at starsonice.ca and mbcentre.ca

Great seats on sale now at starsonice.ca and ticketmaster.ca

Westoba Place at the Keystone Centre

Great seats on sale October 7 @ 10am at starsonice.ca and sasktix.ca

Great seats on sale October 7 @ 10am at starsonice.ca and Western Financial Place